Have you ever heard a Christian apologist claim that the gospel narratives are eyewitness accounts of the stories they narrate? How likely do we think that might be? In order to examine that we first need to understand who the traditional authors are, so here’s a short redux of who and what Christians claim the authors were according to the traditional view:

Mark – would have been a traveling companion of Peter. Peter would have been one of the original twelve, but we don’t actually have a gospel according to Peter (at least not in the canon), so the next best thing would be a gospel according to Mark, who would theoretically provide an account of Peters’s experiences. Assuming this is true, at best this would be hear say rather than an eyewitness account, because even assuming the traditional authorship nobody ever claims that Mark would have been one of the party that traveled with Jesus.

Luke – is said to have been a traveling companion of Paul. Christians love to say that Luke was a physician because in the modern world we all live in this implies a great deal of formal learning and critical thinking, but the truth is that in the ancient world there was no such thing as a medical doctor in the modern sense. There were no formal medical schools or medical degrees, and the best we could conclude about being a “healer” of some kind would likely mean faith-healing or some other kind of witch-doctoring. Moreover, the Apostle Paul would never have met the living Jesus so all we have in Luke’s account is, at very best, a retelling of what Paul would have said. This means that in Luke’s case we have – again, at best – second level hearsay.

John – would have been one of the original twelve, and was a fisherman before he joined Jesus’s ministry. So John is only the second of the four gospel writers to actually have the *potential* to be a real eyewitness.

Now let’s unpack the question just a bit more. First, none of the gospels is actually signed, they’re all anonymous. This should raise the immediate question about how authorship eventually was attributed to these four men, and the answer is that somewhere near the end of the second century some unidentified Christian said these would have been the four authors. The documents themselves would have been circulating for perhaps a hundred years before anyone claimed these four fellows as the authors. I would argue that the authorship was assigned precisely to provide authority for what would eventually become the orthodox view. Keep in mind, too, that with the evolution of the canon that the other stories being written had to be harmonized. It wasn’t going to work to attribute authorship to somebody who had already suffered an early demise according to church lore (someday Rex and I will have to write another blog post about the problems presented by Luke/Acts). Another problem is that none of the gospel writers actually *claims* to be an eyewitness. To make sure everyone is keeping up so far, all this means that even if we take the traditional authorship purely at face value, we only have two potential eyewitnesses because neither Mark nor Luke claim to be and the traditional understanding doesn’t say they are. On top of that Luke freely admits in his preamble that he has been looking at other sources in his attempt to create his own narrative (and we happen to know that Luke borrowed heavily from Mark).

So what are the problems with the traditional authorship claims about our two possible eyewitnesses?

Matthew. One of the biggest problems with the traditional view is that Matthew clearly copied much of his work directly from Mark (just as we know Luke did). The vast majority of biblical scholars agree that Mark’s gospel was the very first one to appear in circulation among Christian communities, and a modern textual analysis of Mark and Matthew shows us that Matthew takes nearly fifty percent of his narrative from Mark – and he does this *word for word*. Why would an eyewitness need to copy from somebody else? The second problem, which we will see again when we discuss John, is that it is very unlikely that a man who would have come from a rural part of a backwater of the Roman Empire would have been literate in his own language, let alone in Greek. If you weren’t aware before now, each of the four gospel narratives is written in Greek, which was *not* the language of Jesus. Jesus would have spoken a language called Aramaic, which isn’t even close. In the ancient world there was no public schooling, which means that the only literate people would have been the wealthy, who had access to formal private learning. The best estimates of literacy in the ancient world tell us that perhaps only 1% of the population would have been able to read and write, and moreover that the 1% in question would be concentrated in large population centers rather than in a rural area like Galilee. Before you go arguing that a tax collector would have to be literate, we know from history that this isn’t actually true. And more than that, being able to count and to take names and numbers is a far cry from being able to write a literary composition in a non-native language. I’m willing to bet that you (the reader) are able to count to ten or maybe even to a hundred or more in some other language – say Spanish. You also probably have the ability to write down a number of Hispanic names. But being able to do that does not in any way enable you to create a literary composition in Spanish, and you’re already literate in your native language! The third problem is the date of the writing. Whoever this author was, he waited until 50 or so years after Jesus death before he wrote the story. Taken altogether, this means that in order for the traditional authorship claim to be true in Matthew’s case, he would have to live fifty more years (not likely in the ancient world – consider that if he were Jesus’s age it means Matthew would have been an octogenarian at the time of his writing), learn to read and write very literate Greek late in his life, and then wait until he came across the non-eyewitness account provided by Mark and copy nearly fifty percent of it word for word. This strains credulity to the breaking point.

Ok, then what about John? In John’s favor the story he tells is unique compared to the Synoptics and doesn’t seem to be copying from any earlier source. The date of this work is later than that of Matthew, and most scholars would say it was written somewhere between 90-110 CE. So the problems with traditional authorship in John’s case are that an even older man than Matthew would have been has now waited until he is an extremely old man (consider that if he had been Jesus’s age then he might have been more than 100 years old when he decided to write his narrative), and that a fisherman would eventually come to be writing in literate Greek. Once again this really defies credulity.

What do apologists say? One of the first things you’ll hear them say is that Mark wasn’t the first gospel, that Matthew was. This is problematic for a lot of reasons, and there is a clear theological agenda for making that claim. The evidence is strongly in favor of what we call Marcan Priority (Mark was first). The other thing that apologists will tell you is that there is *no*reason* that the gospels could *not* have been written by old men, in Greek, and that these old men could plausibly have waited their entire lives to learn a new language and then to tell the greatest story ever told. Note the bait and switch there – when confronted with the request for evidence to substantiate the traditional view, the reply is merely that it *could* have been that way. Given what we know about the ancient world, how likely do YOU really think that is? And why would these guys wait so long to tell their stories?

What if we asked this question in a modern context as a way of framing likelihood? Imagine living in rural Nebraska in the year 1920 and witnessing space aliens coming down to earth in the middle of a farm field to establish their first interstellar embassy with the people of planet earth. That would be a world changing event, right? So then let’s imagine that such a world changing event wouldn’t make any of the newspapers, and eventually that only two people would ever bother to record that this event had happened at all. And then let’s imagine that those two people waited the entire lives to write down a narrative of what they saw. And then let’s imagine that they wrote that narrative in Chinese in the year 2010. Does that really sound plausible? No, clearly it doesn’t.

Conclusion: no, even in the best case scenario the gospel narratives are not eyewitness accounts of the events they narrate.

Rex Here… Check out part 3 of our interview with Jim Hall and the Atheist Edge! Cheers!

Rex here…  The link above is part 2 of our Interview with Jim hall and the Atheist Edge.  Enjoy!

Rex here… Here is part one of the interview that Owen and I recently did with the Atheist Edge show.  In this video we talk about the how our views of the Bible changed as we moved from belief to non-belief and we kicked about some theories about the early church. Enjoy!

Rex here… Owen and I are excited about our presentation next Monday in Jacksonville, Florida!

The FCFS team has placed a radio ad on their local NPR station:

…as well as a great advertisement in the local newspaper:

We hope to see you all there! 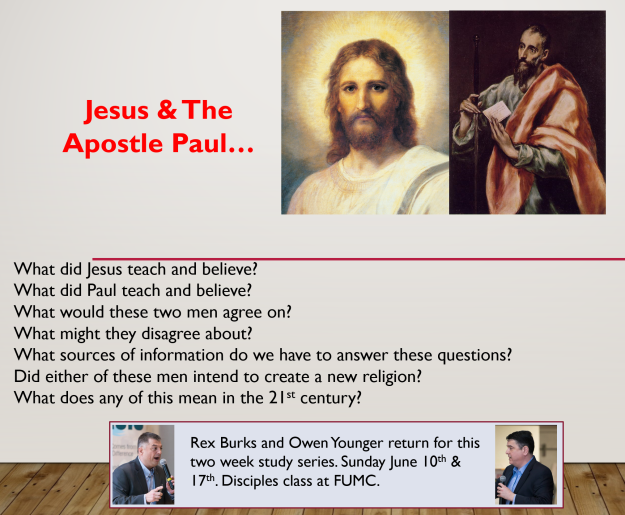 An intergenerational discussion/dialogue group, interested in contemporary political, social and economic issues from a Christian perspective. All persons who like this format are welcome regardless of age or marital status. Lower Level, Room G14

Owen and I have given this “Did you hear…” talk several times now, but we had never gotten a good video until now.  This was made at the “Humanists of Fort Worth” meeting two weeks ago.  The audience was amazing and they gave us a lot of time to tell our story.  Special thanks once again to our good friend Zachary Moore for his amazing video skills. He can make even us look good!  Click on the image above and enjoy!  And, as always, we welcome any feedback!  Cheers!